The Association of Fundraising Professionals (AFP), of which I am a member and President of the Las Vegas chapter, hosted its annual International Conference on Fundraising this week in San Francisco.  It was a long and powerful three days, full of inspiration, great insight and comparing notes with some of the smartest, finest people in the industry today.  I’ll be honest – it didn’t light me up like previous years have.  It was a little flat and didn’t pack as much depth as I’ve seen before, but it is always, always time well spent and you do come back feeling like you’ve been on the mountain and had a chance to recharge your fundraising batteries. 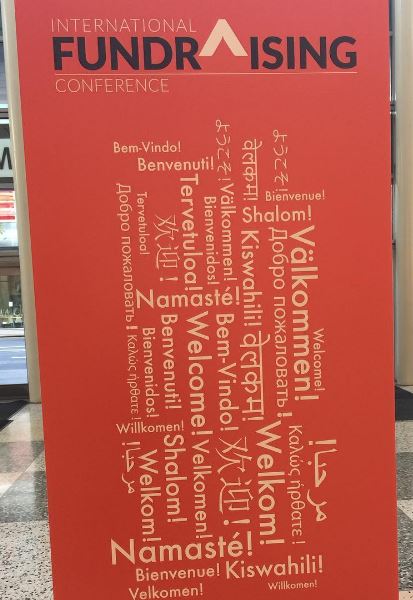 So, my top takeaways:

1) Fundraisers are the kindest, warmest, most lovely people on the planet.

Everywhere I went people were smiling, talking, engaging with each other – introducing themselves and shaking hands and hugging.  Walking around on the streets near the conference center, everyone was open to conversation and willing and interested in talking.  The energy was high and the love was flowing.

2) There is a movement afoot and we’re ready for change.

There was an undercurrent, both from the stage and in the seats, that we, the fundraisers, aren’t just blindly accepting status quo anymore.  Maybe the donor retention message is finally getting through or maybe we’re ready to claim our space, but more-and-more you hear “This isn’t working, we need to do better.”

3) That said, we’re still talking about the same stuff.

We are still talking about:  how to find more donors, how to keep more donors, how to get more donors to give more.  There were a couple of times that I wanted to stand up and scream, “WE KNOW HOW TO DO THIS!!!”  Sure, there were a LOT of first-timers this year – and that’s GREAT!  Whole troves of college students coming to learn about fundraising . . . but there were a lot of people, too, who are seasoned development professionals drinking from the same fire hose. Why are we still having the same conversations?

4) We need more mentors and leaders on a one-on-one level.

Nobody has time; everybody’s busy.  But we make time for the things that we believe in and are important to us – somehow we find the time.  If we want the profession to advance, if we want to lead change, we have to make the time to mentor and be mentored.

5) You can’t live on the mountaintop.

Theory is great, but the practical day-to-day doesn’t always live up to theory and best practice.  We all have limitations – Executive Directors who MUST read every letter, Boards who aren’t interested in fundraising, co-workers who just will NOT update the CRM.  Our jobs are, more often than not, to create phenomenal, donor-centered experiences in spite of the limitations.  And implement the best practices we can.

6) Speaking of Best Practices – Get Rid of ‘Em.

Some of the best nuggets of info & inspiration can be found in the Rebels, Renegades & Pioneers track.  Simone Joyeaux dropped this little bomb during one of them and if I take nothing from this conference but this, I’ll consider it time and money well spent:

Then she grabbed me by the lapels and blasted, “I HATE THE PHRASE ANNUAL FUND.”  I blacked out after that, don’t remember a thing. #FanBoy

Point is – stop doing things because it’s the way we’ve always done it or that’s the ‘best practice.’ If we stuck with best practice we’d still be fundraising off of 3×5 cards. 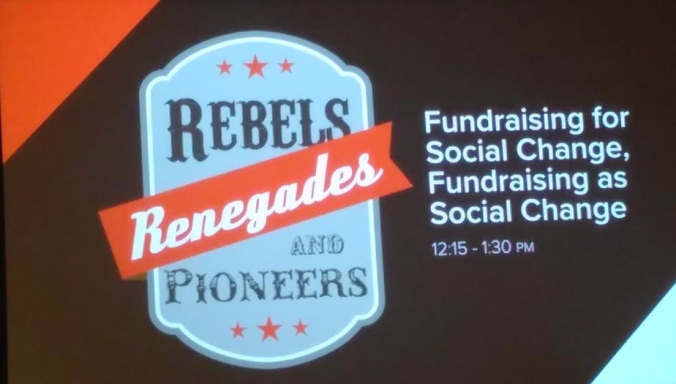 Raising funds is transactional, singular and financial-based.  Develop relationships.  Develop boards.  Develop institutions.  Develop capacity.  All of which have a side benefit of bringing in the revenue needed to do those things, but stop fundraising.  We’re bigger than that.

8) Always Be Sure Your Tech is Functioning Order

My phone died halfway through day 1.  Not died as in had no power, but died as in:

This iPhone is no more! It has ceased to be! It’s expired and gone to meet its maker! It’s a stiff! Bereft of life, it rests in peace! Its metabolic processes are now history! It’s off the twig! It’s kicked the bucket, it’s shuffled off its mortal coil, run down the curtain and joined the bleedin’ choir invisible!! THIS IS AN EX iPHONE!!

(With deep, deep apologies to Monty Python).  It was acting up, I thought it would hang on.  It didn’t.  I lost a lot of pictures, a whole bunch of texts and missed a whole session.

I was, truly, honored to be chosen to present a session and even more honored that people actually came! “Data Got You Down? Simplifying Donor-Centered Data Analysis for the Data Allergic.”  Phenomenally smart questions during and after the session, but even the other sessions I went to point out that we really have an opportunity to improve how we use data, what we do with it and being far more strategic about how we implement information in our fundraising.  You can tell the greatest story in the world, but if you’re telling it to the wrong people, you won’t get very far.

There seemed to be a stronger focus on Diversity and Inclusion and the strengths of our differences was evident.  AFP Las Vegas is very proud to have received the Friends of Diversity designation, but I was even more encouraged by visibility at the conference and the acknowledgement that only in celebrating our differences – as people, as nonprofits, in our experiences – do we truly gain equity.

At the end of the day, the biggest takeaway is the connections with people – with other professionals who are in the same trenches, fighting the same battle and doing phenomenal good.  We feed each other and uplift one another when we’re together.  And that is what I’m most grateful for.   Go do good, wonderful, powerful things!

P.S. My favorite fundraising message of the week?  This: