I’m honored to have been invited to speak at the AFP Silicon Valley chapter.  The topic?  My favorite:  The Annual Fund Isn’t Annual.

I’m equally as honored that there were so many responses to a random Twitter question I posted:

I mean, goodness, Simone Joyaux even blogged about it!

The over-arching, most common themes and responses:

MOST of the commentary and responses centered around the name of the thing, but certainly the NEED for it is real.

There was some commentary/discussion on size of gift – a concept that the “Annual Fund” is designed for smaller, lower level gifts.  Also some around methodology – that “Annual Fund” is, by its nature, solely larger-scale solicitations like direct mail or email.

In her blog, Simone calls it:  That fiscal year budget to continue our mission.

That’s really what we’re talking about when we say “Annual Fund” – the funding of our missions, the day-to-day, in-and-out, everything we do.

Which makes it some of the hardest money to raise.

Go back and look at the question again, though:  “What does it mean to say an annual fund isn’t annual?”

They care about how they can solve the problem our orgs exist to tackle.

We, as fundraisers, have to be of two minds about the “Annual Fund” –

Fundraisers – especially those focusing on general operating funding – have to carry this dichotomy in all our work.

I think we have to move out of the mindset of “Annual Fund” and “Year-End Appeal” and “Giving Tuesday campaign” and into a robust, proactive, engaged, ongoing plan.

Acknowledge the Reality of Our World

I started my career as an Annual Fund Manager.  Literally the only option for raising money in a large scale way was direct mail and land-line phones.  Email didn’t exist.  Online giving didn’t exist.  Facebook didn’t exist (Mark Zuckerberg may not have even existed, come to think of it).

Claire Axelrad is exactly right in her 2014 piece “R.I.P. Donor Pyramid” – there are more methodologies, ways of giving, communication streams, ins and outs than we can possibly stay on top of.  It’s not a pyramid anymore, it’s a vortex.

The modern model is more like a vortex — an energized circle where everyone is equal. People move in and out as needed, and your job is to keep the energy flowing.

Donors are “channel hopping” – they give to direct mail here, on the phone next week, by Facebook next month and then set up an EFT/ACH when you’re not looking.

And they drop out equally as quickly.

What Works and What Doesn’t

Well, to be honest, everything works.  And, also, nothing works – like it used to.

Digital (email/online) is not the panacea to save fundraising, particularly in community/individual giving.  In 2018, email accounted for only 13% of all online giving, according to one study.

A stand-alone Direct Mail campaign is not going to raise the significant dollars needed to keep the organization afloat – although we know much more about the neuroscience of donor behavior and direct mail’s motivation response is 20% higher than digital media’s, which means it’s more persuasive.

And social media?  Well, on average, nonprofits raised $1.77 through Facebook for every $100 raised through other online channels.

And we haven’t even touched on mobile, crowdfunding, peer-to-peer . . .

AND for everyone one of these statistics there’s an outlier org that has raised money hand-over-fist in a digital environment.  Or tripled their revenue by doing print newsletters (which – overall – still show some of the highest ROI of all methodologies).

AND AND there are any number of studies, reports, statistics from any number of sources with actual data on performance.  MOST come to the same conclusion:  integrated, multi-channel, ongoing.

So, The Annual Fund Isn’t Annual?

There are any number of conversations about what to call ongoing, general operating, unrestricted support.  Some tests have shown calling it “Annual Fund” really resonates – to the point of including the name “Annual Fund” as a teaser on a direct mail envelope.

There are others who unequivocally state the phrase Annual Fund is jargon and should be obliterated from the lexicon of fundraising terms.

Doesn’t matter what you call it. 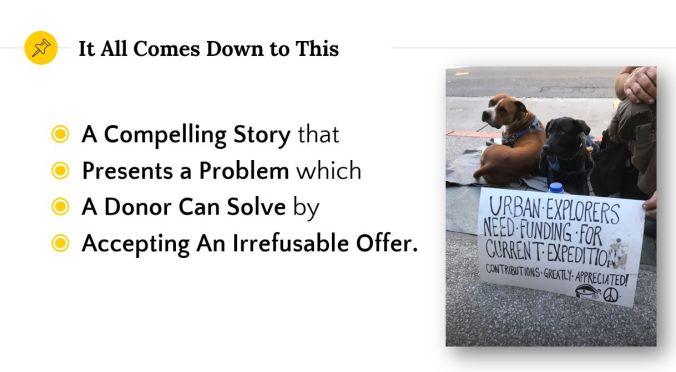 And then measuring those channels, investing in the ones that really work, not chasing after every new bright and shiny toy that’s going to “revolutionize fundraising” and staying consistent to and respecting the needs of our organizations and beneficiaries.

And what they need most – from us – is that connection to passionate, caring, wonderful people who have the ability to change the world – regardless of what way they write the check/click the donate button.